Jamaica - We tour a traditional ganja farm, walk on volcanic rock, and see the sea 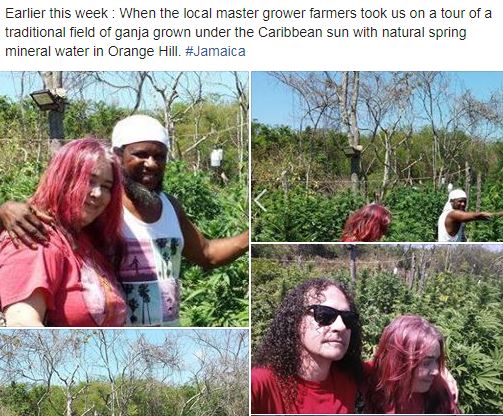 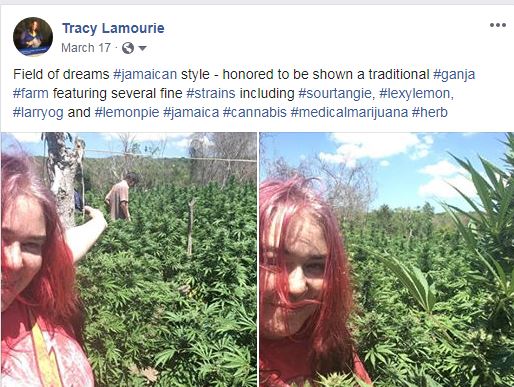 This was only a couple of hours - but it deserves its own blog post!

It was on, I think, the fourth day of our trip to Jamaica and it had been arranged for us to have the opportunity to tour a traditional, outdoor, working ganja farm.  We heard these were master growers, their product famed across Jamaica because of the unique combination of the air, nutrients in the local soil and other things people more familiar with growing would remember better than I do.

Anyway these traditional ganja growers, we understood, were in talks to bring their product into the legal pipeline allowing legit work and money making opportunities for locals instead of just for international cannabis corporations.

The ride up there was kind of a story in itself.  We (me, my husband and nearly 16 year old son who we brought along to the tour though he was completely uninterested because we weren’t about to leave him alone in the hotel and start gallivanting an hour away somewhere in the mountains of Jamaica.  As nice as the people at the hotel were - and they really did treat us like family - I was way more comfortable with us all sticking together in Jamaica.  It’s not like we could just get an Uber back or something if we needed to!

And we knew we were with reliable, trustworthy, professional people.  So we prepared for a family outing to the ganja field as our son asked to stay behind at the hotel unlike 90 percent of teenagers lol.

So there were two vehicles to take the group of us to the farm.  There were the three growers, my husband, my son and me; and the other three members of our party that had travelled from Canada with us.

They piled our family into a regular car - I was both relieved and disappointed - it was the safer but less adventurous option. They piled the others into a little dune buggy kinda cart car thing that looked pretty precarious and off we went on our Jamaican ganja farm adventure!

We didn’t drive very far.  Maybe 20 mins winding roads.  Our driver this time was not Lion but one of the guys who worked with the plants.  He had spent time in Toronto a few decades ago he told us.  I think he said he had gone to school at York.  We spoke of how things were changing as cannabis became legal in more and more international jurisdictions.  He seemed nostalgic for past days of big money and smuggling cannabis in other places in another life - I guess profits aren’t as big these days.  Hopefully the farm workers benefit as they get into the legal pipelines.  There aren’t a lot of ways to make real money there it would seem judging by the lack of real infrastructure and opportunity..

Suddenly we were there. 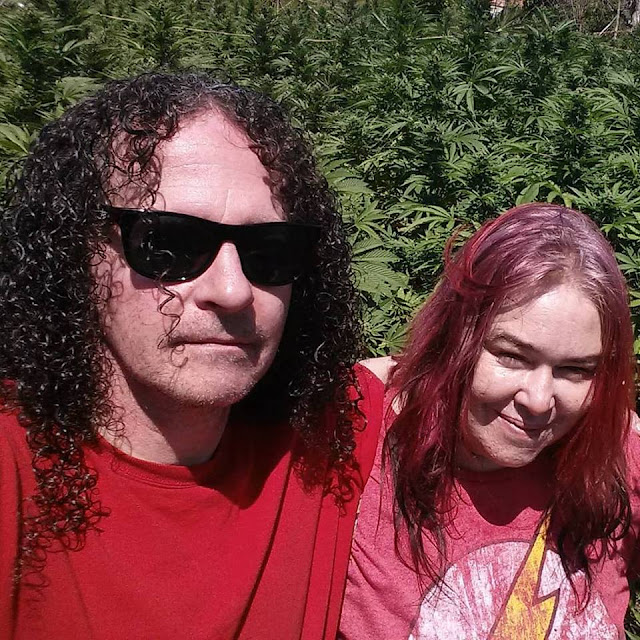 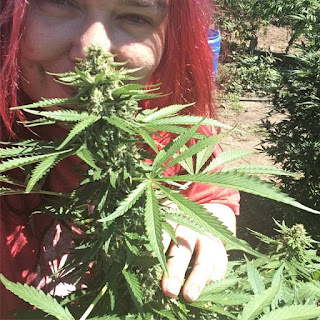 We exited the car and - ohhhh boy was it hot.  No shade to stand under anywhere - but ohhhhhhh
man what a sight.  Fields of fragrant cannabis all around.  The farmers let us wander around among the plants at will, smelling buds and looking at the differences.  I think they said they were growing three strains.

We asked if it was ok to take pictures and they said it was. 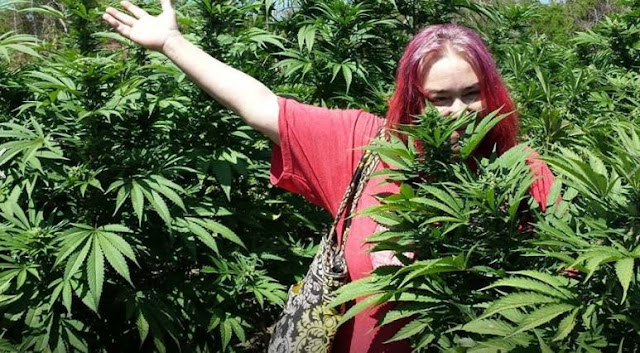 And of course we got a whole lot of pics of us in the fields! 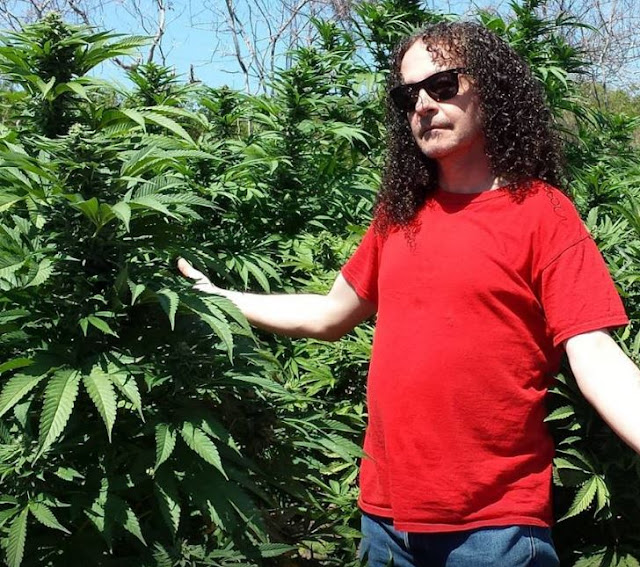 And Dave took some video in the fields.

Check that video out HERE and more video HERE and HERE .

We were there for about half hour.

Our teenage son totally as unimpressed and uninterested as if it was a field of lettuce, was just complaining about the heat for the whole time. Couldn’t really blame him. - it was hella hot!  So hot that as cool as the experience was I was pretty grateful when it was time to get back into the car.

We drove for a few minutes and then we stopped by the Sea which was really neat.  A young girl an older lady and a baby who seemed to know the people you were with came out to chat with us for a while under this covered pagoda thing... 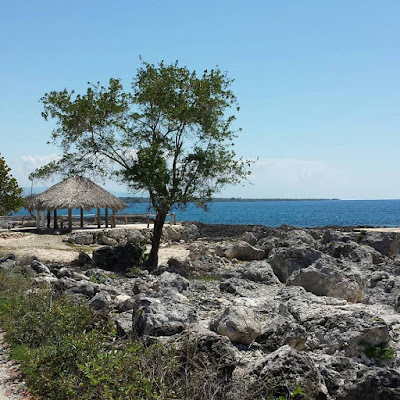 ...and then Dave Cassidy and I followed our hosts closer to the water. 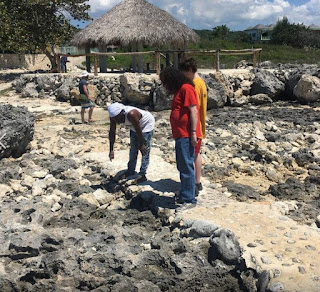 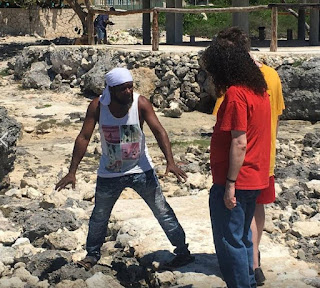 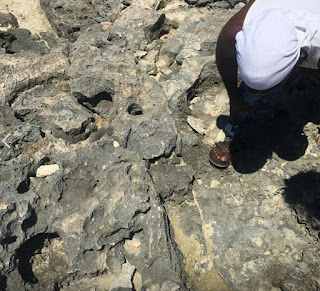 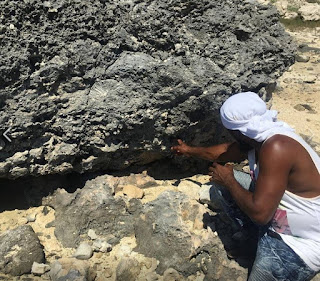 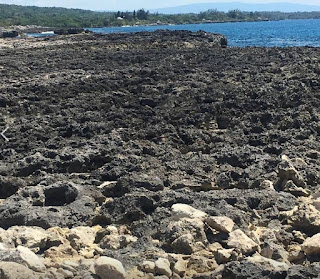 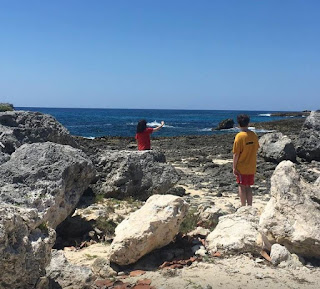 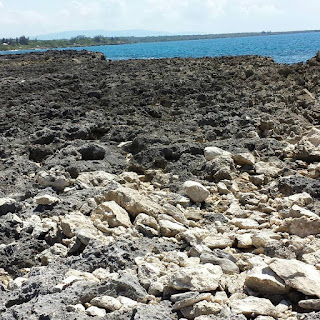 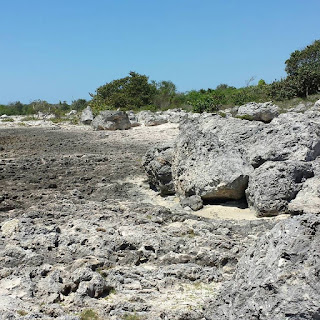 Our hosts agree that it is volcano rock - however they say that it came from somewhere else. They
don’t seem to think that Jamaica itself ever had a volcano... but  Dave disagrees and later we look on YouTube and see some crazy video of somebody in Jamaica discovering some kind of active volcanic rock crazy but all we see is something that looks like volcanic rock and that’s pretty interesting we take a whole bunch of pics... 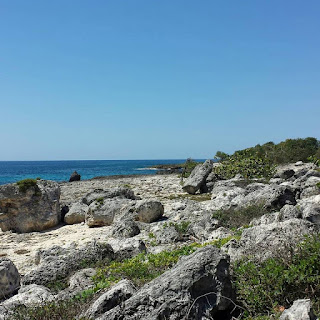 Jamaica, volcanic rock by the sea...

Dave got some great video of the rocks and the water :