This is the story of a power breakfast meeting Lamourie Public Relations held at the glamourous Cavatina Restaurant inside the Sunset Marquis Hotel in West Hollywood, California.

You know me.
I always say it on socials first!
Posted the above DURING the power breakfast meeting with my
client, Modlocks' and Noggin Oil's Karen Wallington

I ended up there with my client Karen, after we cancelled our previous reservation at the Beverly Hills Hotel. I had always wanted to check out the Beverly Hills Hills Hotel, famous since the thirties asthe place where deals are made and people go to see and be seen, but while we were in Los Angeles, the hotel was embroiled in a disturbing scandal where its owner in another country, was supporting grievous abuse has and even the killing of members of the LGBTQ community with a new law. Hollywood was in an uproar about it of course - and so were we. I used this opportunity to educate, when I called The Beverly Hills Hotel to cancel the reservation I had made in much anticipation literally two months before.

It was Karen who suggested the sunset Marquis. The restaurant in the famous hotel.

Many don't know it actually has a full music studio in the basement and has hosted pretty much every rockstar you ever heard of.  Their little bar, which I also pictures of, was (is?) a favourite LA haunt for everyone from Mick Jagger to David Bowie.

(We were there in the morning, so the little bar was dark and closed but I looked  through the window and took a pic to post for the curious on socials.) 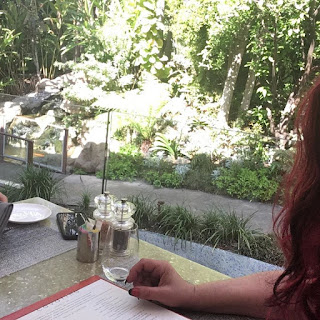 Then we were escorted to our prime table by the waterfall on the sunny patio.
Truly idyllic.

I chose this menu item for 22$ USD
Says a poached egg, but it came with two...

And the food of course was amazing I'm almost embarrassed to say I ordered the quintessential California avocado toast but look at it….
The perfect poached eggs and smashed avocado on rye bread with potatoes, tiny cherry tomatoes, and fresh cantaloupe. 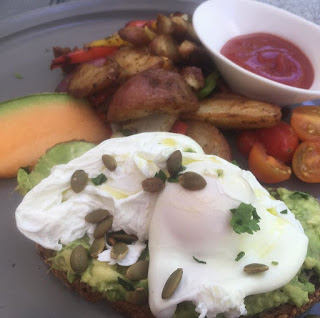 I swear I didn't just order avocado toast because I'm in California...
but they do it better at the Sunset than ANYwhere else I've been.
So there.
. 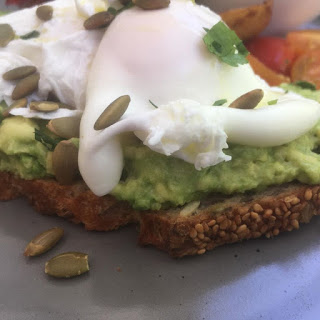 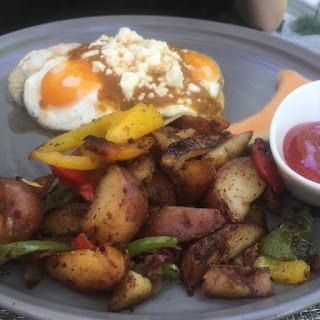 Karen's order...sans avocado toast...
Even in California.
I know. CRAZY. 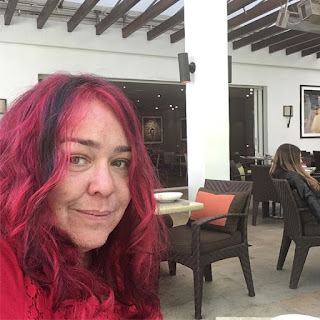 .
The service of course was high end Hollywood impeccable, the other guests dining were clearly a band I should know but unless they hire me I usually don't... LOL!
Yep...I am old enough to be a little out of touch...

In this pic I'm looking out towards the little waterfall, and the camera is looking in towards the covered part of the dining room - where you walk to get to the bathrooms.

Karen used the beautiful location for a little impromptu Noggin Oil photo shoot while I captured the moment for socials. (As I do!). Watch for a future blog post where I talk more about Noggin Oil, the whole reason Karen and I were in the City of Angels!  We were there for a VIP Party that we had planned inviting a bunch of our local celebrity contacts and people who work on celebrity's hair contacts and of course give you an inside seat at that VIP party in a coming post...unlike most travel blogs sometimes I get to take you behind the scenes of some pretty exciting stuff!  But for now ... we were just capturing some cool images for the socials. 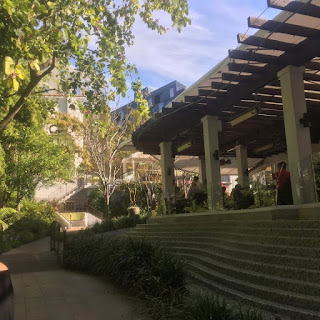 I wandered around taking some pics of the place while Karen took her pics of the products.
Much more beautiful than the Beverly Hills hotel.
In addition to the traditional hotel rooms they had little guesthouses and also rooms with doors stepping right on to the patio of the sparkling pool.
I hope to stay there on a future L.A visit.

Screenshot from the socials...
In case you forgot you are on hallowed ground where a lot of your favourite music was made, they have this giant guitar on the grounds to pose with :)

This is the life….

The not so good : I live too far away to go there every week.
If you are budget conscious this isn't the place for you (but definitely not unreasonable considering…

The amazing:
quality and presentation of the food
surroundings
charming little waterfall
photographs of previous guests whose faces you know very well

Five stars.
I'd give more if I could .

What other people said : https://www.tripadvisor.ca/Restaurant_Review-g33252-d1420399-Reviews-Cavatina-West_Hollywood_California.html