The Other Side - Hollyweird & The Museum of Death (and Serial Killers)

I had found this place online before I left Ontario, and my husband thought it was just weird that I wanted to go. But I had put on my bucket list of places to go if it was at all possible - the things you could see there were just, well weird - things you could never see anywhere else, and for someone who spent a lifetime reading true crime, there were some artifacts worth seeing in real life.

Here is what I had posted on socials : 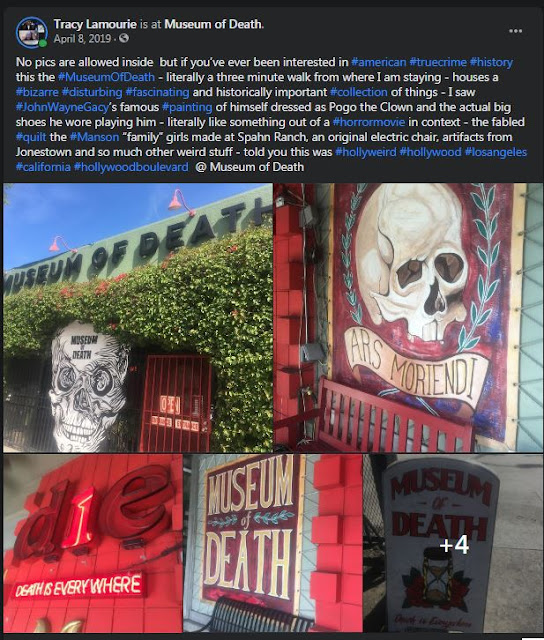 "No pics are allowed inside  but if you’ve ever been interested in #american #truecrime #history this the #MuseumOfDeath - literally a three minute walk from where I am staying - houses a #bizarre #disturbing #fascinating and historically important #collection of things - I saw #JohnWayneGacy’s famous #painting of himself dressed as Pogo the Clown and the actual big shoes he wore playing him - literally like something out of a #horrormovie in context - the fabled #quilt the #Manson “family” girls made at Spahn Ranch, an original electric chair, artifacts from Jonestown and so much other weird stuff - told you this was #hollyweird #hollywood #losangeles #california #hollywoodboulevard  @ Museum of Death."

I probably would never made it there if it didn’t turn out that the place I was staying at, just off of Hollywood Boulevard, was literally about a six minute walk away. So on a morning when my client had said she wasn’t going to be able to get me till close to mid day, I told her I was going to stop by the Museum of Death...

So I took some pictures outside where are you allowed to take them ... 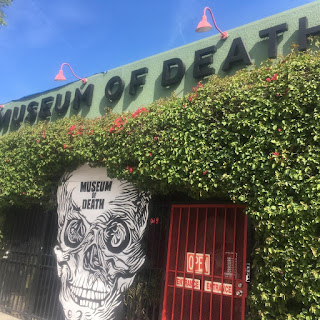 and in the entryway where photographs are allowed... 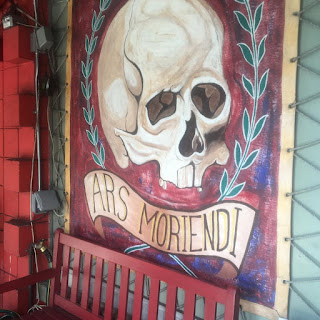 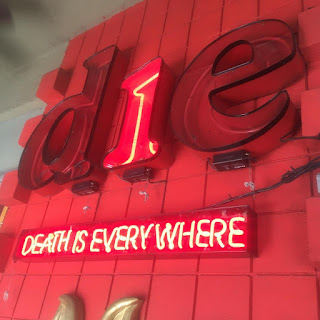 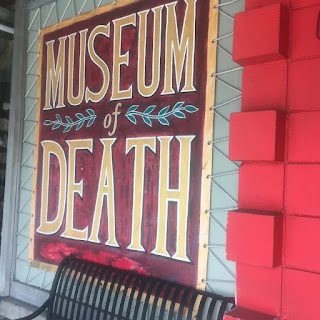 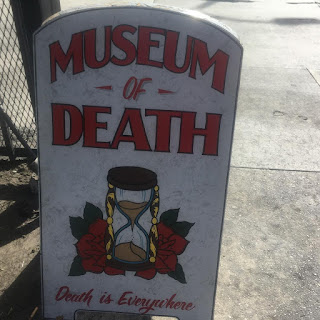 ....but I was respectful and didn’t even take a single picture in any of the exhibits where all the signs clearly say that taking pics is banned….so I don’t have any original pictures to show you here.

Now I feel kind a like a dumbass because I seen a lot of other travellers actually have taken pictures and they post things online like the actual blanket the Manson family girls wove together back in the late 60s... something I stared at for a few minutes.

Here is a pic someone else took that I found online at : McCall

Plenty of other things like an electric chair, John Wayne Gacy clown shoes, and a bunch of other weird shit. They have also had a whole bunch of letters from convicted murderers but for me who for years worked as the director of the Canadian coalition against the death penalty receiving all kinds a prisoner mail from death row, that part was no big deal. I knew prisoner art.

However they had some pretty interesting historical exhibits here.

Definitely worth checking out if you follow this stuff.

I understand they also have a location in New Orleans.

What they say : "The Museum of Death experience is a self guided tour lasting approximately 45 minutes to an hour, however those who can stomach it may stay as long as they like, as there are hundreds of items on display. To ensure that you experience the entire museum we recommend arriving no later than an hour before the posted closing time for that day."

Reviews by other people :

if you want to visit in person, see note below...

**Note - as of December 2020 their website notes that their Hollywood location is currently closed while they look for a new location, so don't go to the Hollywood Blvd address listed above!   The New Orleans location appears to be open according to the site.
at January 11, 2021 No comments: